The Battle of Kringen

On our way back from Langesund recently we stopped in Otta to take pictures of the memorials to  "The Battle of Kringen", in 1612.
This is the old memorial. 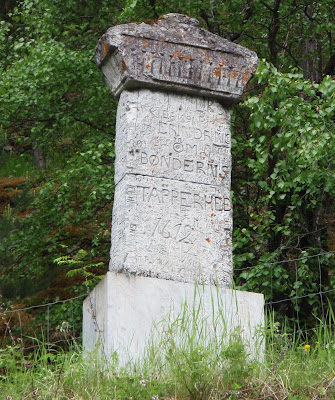 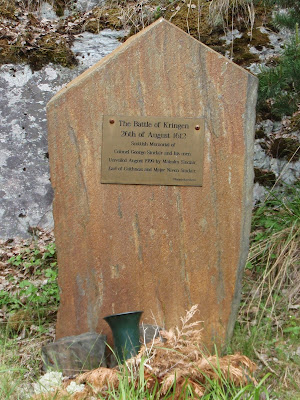 The Scotsmen who were massacred in this battle had sailed from Lerwick on the 16th August 1612.
Here's the bit my Peerie Trowie wrote about it on the '1612' page on Shetlopedia :

Two Scottish troop ships left Lerwick harbour, bound for Romsdal, Norway, after staying two weeks in Shetland, training the soldiers and getting supplies. One of the ships carried one company, commanded by Colonel Alexander Ramsey, the other carried two companies, commanded by George Sinclair and George Hay. The troops were soldiers hired by the Sweedish king to help defend the castle Elfsborg in the war against the Danes. The plan was to march through Norway to Sweden, but their destiny became a tragedy.
On August 19th they arrived in the Romsdalsfjord, and hired a local farmer, Ivar Helland of Vestnes who were out fishing with his daugther, as pilot. He cheated them and led them to the wrong side of the fjord, they landed at Klungnes and had to march 20 kilometers through the woods before they could start up the valley. This made another farmer, Peder Klungnes, able to alert the local sheriff. The wards were lit and the farmers gathered their weapons and started following the Scots.
On August 26th, there was made a trap at Kringen, a narrow path in Gudbrandsdal, the Scots were surronded by the farmers and most of them killed. Only 18, among them Alexander Ramsey, were taken prisoners. They were sent to Copenhagen, and could later return to Scotland.
George Sinclair who was the first to be killed, was a direct descendant of the Sinclairs who were Earls of Orkney and Shetland in the 14th and 15th century.

And here's a link to another website about the battle. http://sinclair.quarterman.org/history/mid/battleofkringom.html

Onywye, yun's enough history.
But I think I'll have to pop into Shetlopedia and correct some of Trowie's typos in that article... LOL
Posted by Auld Rasmie at 7:19 PM

Auld Rasmie
Well, OK, the name is actually Robbie, but for some reason which I can't remember, but has something to do with some verses I have written in the Shetland dialect, I ended up with the nickname of Auld Rasmie, and it kinda stuck. Anyway, I'm a Shetlander through and through but now living in the beautiful West Coast of Norway. And enjoying it.